A series of political conventions in the city of Charlotte—including the Democratic nomination convention in 2011 and this year’s DNC—have left the streets of the city full of surveillance cameras. A total of more than 500 cameras eye citizens and the comings and goings of everyone who crosses their path. But, without tight regulation and concrete rules on usage and procedure, the Charlotte police cameras are under intense scrutiny. 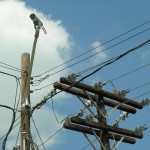 According to the Charlotte Observer, police officers, lawyers, and technicians are literally writing the guidelines now, as the cameras are already mounted and in action.

The plan is to move many of the cameras into higher crime neighborhoods, and some are worried this could present major issues—including possible privacy infringements and even racial profiling.

Charlotte isn’t the first, nor will it be the last, city to have such a camera system. Chicago, Baltimore, and D.C. are just a few of the others with increasing surveillance systems. But like Charlotte, these cities aren’t without controversy.

Many of these systems are so new that there is no concrete evidence on whether or not they have prevented crime as city officials would like you to think. A study from the Urban Institute last year, however, did show some crime reduction in areas where cameras were posted. Whether that crime simply moved out of sight of the cameras, remains to be seen.

The cameras cost between $8,000 and $8,500 initially. And they aren’t free to maintain. They are all connected wirelessly to a command center in police headquarters. Two rooms at headquarters are crammed with monitors; one was set up just for the DNC.

The city maintains that the current system has stopped and solved car thefts. That it has had some crime-fighting usefulness. But, at what cost?

“There’s nothing that says simply because you have cameras that you have to use them,” said James Ferguson, a Charlotte civil rights attorney who believes the cameras purchased for the political conventions should be retired now that those conventions have passed. “It’s not just an expectation of privacy, but it’s also a question of to what extent do we allow government intrusion to go unchecked. … We’re talking about using cameras because we’ve got them, not because we need them.”

In the meantime, though, the city seems to have no intentions of getting rid of the cameras and instead plan on using them as much as possible, whether or not they have a legitimate crime prevention use in light of civil liberties.