Over the past few months, every Monday has marked a new protest in downtown Raleigh. Collectively labeled as “Moral Mondays” these protests have focused on everything from women’s healthcare changes and cut unemployment benefits, to the repeal of the Racial Justice Act and possible voter I.D. requirements—symbols the protestors say are signaling the downfall of North Carolina.

The protestors are parents, grandparents, and children. They are doctors, educators, and the unemployed. Despite what some websites and opponents would have you believe, the majority of those arrested are from North Carolina and represent a good cross-section of the state’s population. They are there to protest a variety of things and many of them are not scared at all of being arrested. 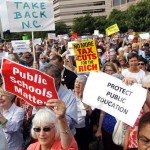 A recent editorial in the NY Times calls the fuel for these protests, the “Decline of North Carolina”. They write:

North Carolina was once considered a beacon of farsightedness in the South, an exception in a region of poor education, intolerance and tightfistedness. In a few short months, Republicans have begun to dismantle a reputation that took years to build.

As with the Occupy protests of last year, these protestors have to know their freedom is on the line. Hundreds have been arrested and if Moral Mondays keep happening, those arrest rates will continue.

The police can arrest you for disregarding their orders, interfering with their work, or causing a public disturbance. One only has to see the photos of elderly North Carolinians to know that physical resistance is not required for the cops to make an arrest.

Disorderly conduct laws in North Carolina are quite broad and this is why they are often applied in situation like the Occupy Raleigh protests or the Moral Mondays. Refusing to leave an establishment after being ordered, blocking access or preventing operations of a business, or using any language that could incite violence could all warrant a disorderly conduct charge.

Another frequent charge in these situations is a failure to disperse charge. If police order you to leave or disperse and you refuse, you could be charged.

Both of these offenses are Class 2 misdemeanors and could result in a jail sentence.

Going into protests like these, it’s important to know what you could face if you run up against an unhappy cop or a volatile situation. If this occurs, having a local defense attorney on your side in court could help mitigate the consequences.

Contact our offices today for a consultation on your case.